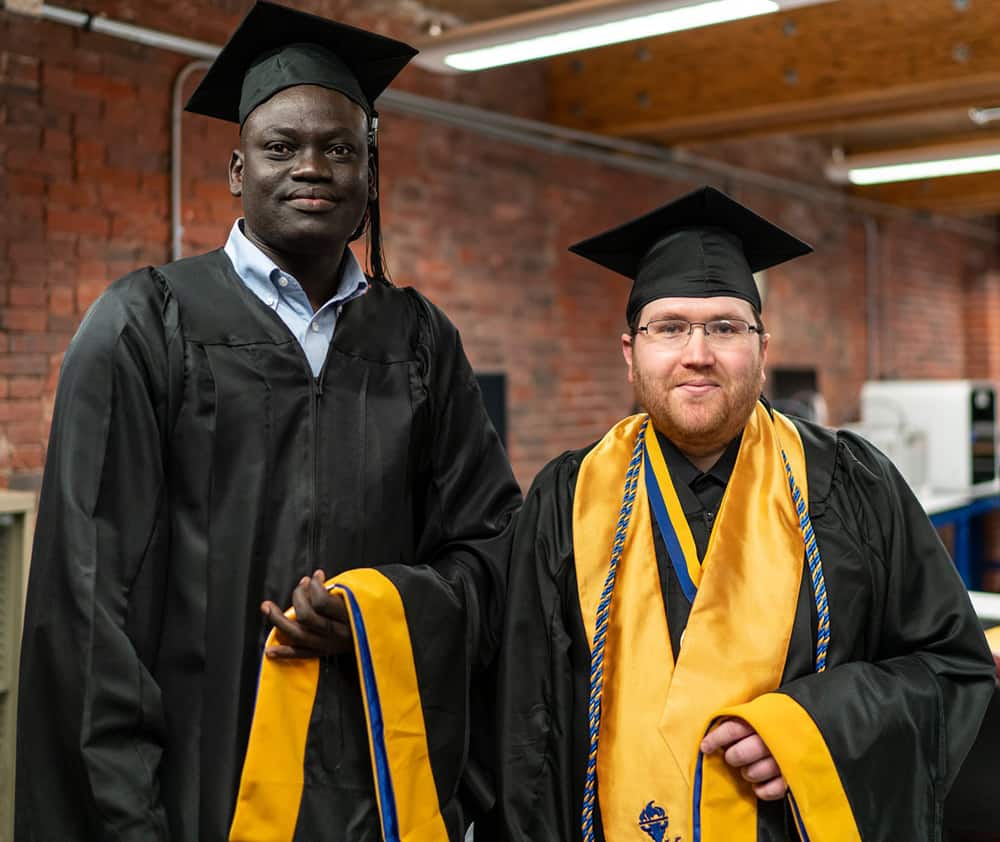 Macuei Mathiang worked for MCE123 during the Summer of 2018 after he graduated in the same class as the MCE123 Company Founder, Patrick R. McElhiney. They are both seen pictured to the left on the day of the M.S.I.T. Hooding Ceremony, which was part of the graduation commencement at the University of New Hampshire, Manchester (UNHM). Macuei and Patrick worked on developing the eMarketing Planner, located at www.emarketingplanner.com. The idea was first developed by Patrick during his COMP 525 Data Structure Fundamentals class, that focused on Python programming. Patrick helped Macuei learn how to develop a Model-View-Controller (MVC) website using Django during his internship with MCE123, and Macuei went on to develop a Master's Project using Python and Django as part of his final class in the Master's of Information Technology degree program at UNHM. Patrick purchased two Django books, and two Django How-To DVDs to help Macuei learn how to use the web framework.

What Patrick liked the most about Macuei during the internship was how he shared food from his African culture one day when Patrick was helping him to figure out some coding techniques. They were like corn nuts, but from Africa - something Patrick had never experienced before.

eMarketingPlanner is currently in its infancy stages of development, because not all of it could be completed during the Summer of 2018, however the website does work already, and allows users to create free marketing plans. Eventually, Patrick wants to make the web platform more robust, offering to fill-in information for the user that doesn't necessarily have a degree in Marketing Management like Patrick does. It's currently difficult to know what to put into the application for the various fields without having a Marketing background, so Patrick is going to spend more time developing ways to simplify the process, and it could one day be tied in to the main MCE123 website, or remain as a separate website.

eMarketingPlanner currently uses a custom web interface developed mostly by Patrick with Macuei's help, that works with a PostgreSQL database that was entirely setup by Macuei. This made it possible to export the database, and also restore the database after major structural changes - which was a major improvement from the previous database being used, which was SQLite.

Macuei now has a successful career in an Information Technology-related field in New Hampshire, and Patrick continues to monitor his success. Macuei was driving for Uber to help pay his bills before he finished his MSIT degree. If you're interested in hiring Macuei, you can find him on LinkedIn here: https://www.linkedin.com/in/macuei/